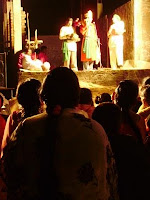 Sarapaka February 8th 2010: A new Arbor operational centre has been officially inaugurated at Sarapaka (Khammam area) in the north of Andhra Pradesh on the border of Chattisgarh. This tribal region is extremely isolated and underdeveloped, it is the 19th area where the program is asked to start its community based activities in collaboration with the local authorities and partners.
At the presence of the Surpanch (chief of the village), of Arbor India chief coordinator, of the executive project manager and local responsible staff, the inauguration ceremony has been conducted by the Arbor Kaladarshini cultural team and introduced by valuable speeches from the honorable guests.
The new area is managed with DSS Society and involves actually 22 new SH groups with a total of 220 beneficiaries and staff of 2.