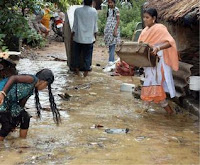 Andhra Pradesh, November 8th 2012: Cyclone Nilam hit severly Andhra Pradesh, Tamil Nadu and Sri lanka forcing thousands to flee their homes and claiming tens of lives. It is estimated that 250000 hectars of crops in the only region of Andhra Pradesh have been lost. After 6 days of precipitations with 800 mm rain, more than 130 villages in our pertinence area are evacuated and 68000 people are now hosted in 86 refugees camps. Malaria, dengue and chikungunia epidemics are spreading fast among the population.
The Arbor staff is active in the reorganization process in 54 villages of the district of Khammam.